RESOLUTION FROM THE PILOTS OF THE ICELANDIC COAST GUARD

The collective labour agreements of the Icelandic Coast Guard's pilots' have been open since 31 December 2019, and negotiations have been slow and arduous. Throughout this period, we have made every effort to maintain a high level of service, despite understaffing and perceived unwillingness to negotiate on the part of the State.

As the Coast Guard pilots have police powers, they do not have the right to strike. Therefore, their labour agreements have historically been linked to CLAs of comparable professions, for the longest time through a statutory link, or until 2006.

The Ministry of Finance is now vigorously attacking this arrangement, with a clear demand for a new, original wage agreement without links to comparable professions. This will not only affect pilot benefits but will also greatly increase staff turnover among the Coast Guard's pilots.

Maintaining standards for All-Weather Search and Rescue is costly and the Coast Guard spends hundreds of millions of ISK on training for each pilot. Increased staff turnover is therefore quick to more than offset the disconnection of wages from comparable professions.

The Ministry of Finance also vigorously undermines aviation safety by demanding the abolition of the pilot's seniority list, which is one of the cornerstones of safety culture in aviation around the world. This arrangement has proved successful, as such lists ensure transparency, professionalism, and that pilots can report incidents without fear of punishment. The Ministry has presented no objective arguments to support its position, and in fact the pilots' negotiation committee has perceived a lack of professional knowledge and understanding of the unique position of the aviation industry in the negotiations.

The Ministry of Finance is attacking a profession that does not have the right to strike, so we are in an almost hopeless situation.

Even more serious is the endangerment to the Coast Guard's flight safety with grave consequences for people who need their help. The Treasury can expect hundreds of millions in additional costs due to the greatly increased turnover of pilots and the associated loss of knowledge and experience.

We, the pilots of the Icelandic Coast Guard, hereby express great concern about the future operation of rescue aircraft for all Icelanders, both at sea and on land.

We demand fair and objective negotiations.

Pilots of the Icelandic Coast Guard

FÍA, the Icelandic Airline Pilots' Association, condemns the fact that the Icelandic Ministry of Foreign Affairs has hired Blubird Nordic to handle the transport of goods, incl. military equipment, in relation to the war in Ukraine.

FÍA has repeatedly pointed out how Bluebird Nordic, which operates on the basis of an Icelandic air operating license and is thus subject to Icelandic law, has violated Icelandic labor legislation through social dumping and bogus self-employment, and ignores its Collective Labour Agreement (CLA) with FÍA.

In addition, Bluebird Nordic has completely ignored the decision of the Labour Court from 16 September 2021, and in doing so has made a serious attack on the constitutional rights of trade unions and the rights of workers in Iceland who work according to CLAs.

We must demand that Icelandic companies respect the law, Collective Labour Agreements, and decisions of the courts.

It is therefore completely unacceptable for the Icelandic government, who work on behalf of taxpayers,to do business with such a company.

FÍA has previously challenged regulators, authorities, and ministers to get involved in the matter and ensure that Bluebird Nordic complies with Icelandic law and court rulings.

The FÍA newsletter for December is now out. Among articles are news of the winter service at Keflavík Airport, the new CLA with Eagle Air, and the state of play of the CLA negotiations for the Coast Guard pilots, who have been without a contract for two years now. Enjoy and have a happy holiday!

Recently, a ruling was handed down in the Icelandic Labour Court where Bluebird Nordic's lay-offs of all FÍA pilots were ruled illegal. It should be noted that just prior to the lay-offs, the company had hired a corresponding number of bogus self-employed pilots through an foreign employment agency.

FÍA challenges Bluebird and the Confederation of Icelandic Employers (SA) to abide by the current Collective Labour Agreement (CLA) and the ruling of the Labour Court.

The ruling states clearly that when a Collective Labour Agreement expires, its provisions apply until a new agreement is reached, and CLA negotiations were well under way when the lay-offs occurred.

According to provisions of the CLA, FÍA members have priority over 11 full-time positions, as Bluebird pilots. This provision was confirmed by the Labour Court.

Despite the ruling of the Labour Court and the current CLA, both SA and Bluebird Nordic seem to think that they don’t need to comply with the ruling in question and the wage CLA.

Rule of law is a fundamental component of Icelandic society, and we must insist that Icelandic companies respect both CLAs and court rulings. This attempt to undermine the rules of our labour market, is unacceptable.

It is a serious violation of the constitutionally protected rights of trade unions and the rights of Icelandic workers who work according to a collective labour agreement.

We call for the involvement of the relevant supervisory bodies, the relevant authorities, and the Minister, in this matter, to ensure that Bluebird Nordic and the Confederation of Icelandic Employers comply with Icelandic law and with court rulings.

FÍA calls for a broad consensus of the country's trade unions against the Confederation of Icelandic Employers' dangerous attack on the Icelandic labour market.

The event will be held at Gamla Bíó on Ingólfsstræti.

E-invite will be sent out at a later time. Save the date!

The FÍA newsletter is now out for September, as always both in English and Icelandic.
Please note that on page 2 you will find the Table of Contents with direct links to the articles in English - otherwise the English version starts on page 16!

Today, the Icelandic Labor court issued a ruling in the case of the Icelandic Airline Pilots' Association (FÍA) against the Confederation of Icelandic Enterprise (SA) on behalf of Bluebird Nordic. The ruling confirmed that it was illegal of Bluebird to lay-off pilots working according to a CLA with FÍA members while hiring bogus self-employed pilots to replace them. This is an important precedent as the victory is not only important for pilots but for all unions in the country.

"The facts of the case are that a rapidly growing Icelandic airline laid off all its pilot who were union members, only weeks after having hired a comparable number of bogus self-employed contractors, ready to replace the union pilots. This was done despite the fact that the Collective Labor Agreement between the parties contained a clear provision on the priority rights of FÍA members to work for Bláfugl, which the court confirmed was still valid, just as the Court of Appeal had previously ruled," says Jón Þór Þorvaldsson, FÍA president.

"This is an important victory for unions, regulators and the government, who are all fighting against bogus self-employment."

The Annual General Meeting of the FÍA Pension Fund (EFÍA) will be held on Thursday, 3 June 2021 at 13:00 at the FÍA headquarters in Hlíðasmári 8, Kópavogur.

All fund members have the right to attend the meeting, participate in discussions, and to submit proposals.

Further information about the meeting can be found here.

The ruling of the Appeal Court reaffirmed once again one of the main principles in Icelandic labor law that when a wage agreement expires or is terminated, the rights and obligations of the parties continue in accordance with an earlier agreement while there is still no agreement, and no strike has taken place. Therefore, the priority right provisions for FÍA members were still valid when Bluebird Nordic hired 10 pilots as bogus self-employed contractors in November and fired the corresponding number of FÍA pilots in the following month.

The Appeal Court also confirmed that a legal strike, announced by a trade union, binds all workers in the profession in question, as well as those outside the trade union. In other words, the pilots who flew for Bluebird during the strike were strike-breakers and the FIA's actions to defend the strike were perfectly legal.

Landsréttur also held that Bluebird Nordic had to bear the brunt of not disclosing the terms and conditions of employment of the pilots it to be "self-employed contractors". This once again provides clear evidence that Bluebird is carrying out pseudo-contracting that they are trying to keep out of the light of day.

As specified earlier, Landsréttur upheld the ruling of the district commissioner and later the district court and furthermore requires Bluebird Nordic also to pay FÍA ISK 440,000 in appeal costs.

It should also be noted that the main proceedings in the Labour Court case, concerning the legality of the FÍA pilots’ dismissals, took place in April and a ruling is expected shortly.

The FÍA newsletter for the month of April is now out, featuring articles on e.g. safety issues, the pension fund investments, ITS Iceland, flight crew vaccinations, and work on changes to pilot training.
The English half of the newsletter begins on page 16 - click here to read!

A new Collective Labour Agreement was signed by FÍA and Norlandair at the Icelandic Aviation Museum in Akureyri on 16. March, 2021. The agreement was then approved by all pilots through e-voting that concluded on Monday, 22. March.

„On behalf of FÍA‘s negotiating committee I congratulate all Norlandair pilots on the new CLA, and to the representatives of the company I send thanks for the efficient collaboration. A new CLA marks a new beginning, and I hope that it will prove the basis to empower the development of Norlandair and its market position,“ said Högni B. Ómarsson, head of FÍA‘s negotiation committee with Norlandair. „I hope we will soon receive news that the pilots who lost their jobs last year due to the recession will be rehired. Let‘s look with bright eyes ahead, and not dwell on the difficult times that have passed. We should celebrate these results.“ 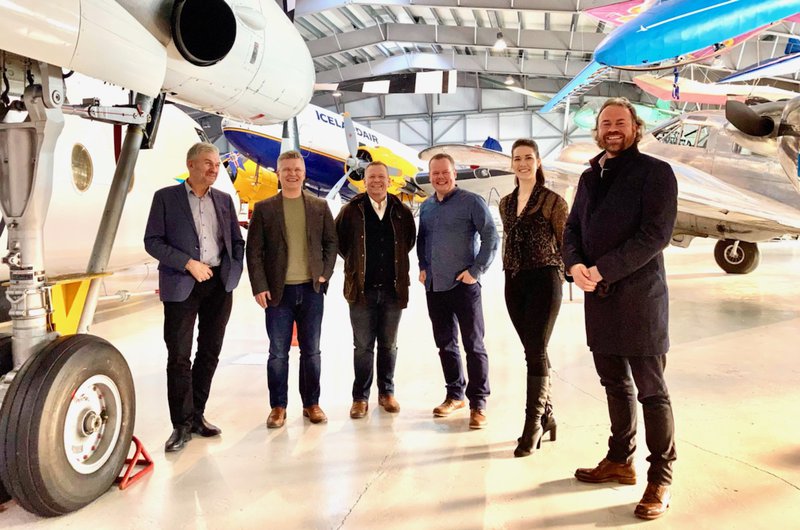 FÍA has prepared a short, animated video on the Association's debate with Bluebird Nordic. FÍA believes the company is using social dumping and bogus self-employment to drive down cost.

You can watch the video in English on FÍA's Facebook page and on its Youtube site, FÍA TV.